Before lodging a repair request, read through the information below.

Dealing with a clog in your bathroom or kitchen? Fortunately, most clogs can easily be resolved on your own. Use the information below to attempt to troubleshoot.

Household plungers work well to resolve most toilet clogs. Simply press your plunger over the toilet drain and create a seal for suction. Move the plunger up and down to force anything stuck in the pipe through the system.

If your sink, shower, or bathtub clogs, first try to use a plunger to clear the pipe. If this is unsuccessful, you may want to purchase a drain cleaning tool. Many hardware stores sell these inexpensive plastic cleaners, which are used to fish large clogs out of the pipes.

If you use drain cleaning chemicals, be sure to purchase noncaustic products that are safe for home plumbing systems.

Have you lost electrical power or water access in your home? Before making contact with us, please call your utility provider to troubleshoot the issue further. There may be an issue in your neighborhood restricting access to your property.

If you don’t have enough hot water (or any) in your home, check the settings on your water heater to attempt to isolate the problem. It’s possible your tank is operating in vacation mode, for example, which limits the amount of water available at any given time. If your water heater is powered by gas, you should also verify that the pilot light is lit.

Heating or air conditioning on the fritz? Before you make contact with us, check the settings on your thermostat. It’s surprisingly easy to accidentally make changes that cause the system to behave unexpectedly.

In the event of a maintenance emergency, call us for immediate help.

If you’re in a dangerous situation and need first responders, call 911.

I lost power or need to reset the circuit breaker Before electricity can be restored, the circuit breaker must be reset. However, even before you do that, you must take steps to ensure that it is safe to do so. Turn off or unplug all of the devices that are plugged into the circuit. Make certain no dangerous condition exists before restoring power. A Circuit Breaker which has been tripped will either be in the middle or “OFF” position. Locate the tripped circuit breaker and reset it by pushing it all the way to the “OFF” position and then back to the “ON” position. Often when you can’t cannot reset the circuit breaker, it is because it must be turned all the way to the “Off” position first. Electricity should now be restored to the circuit. If the circuit breaker trips again before you have turned anything on or plugged anything in, please submit a maintenance request immediately.

If no circuit breakers were tripped and you still do not have power at an outlet, the circuit is probably on a GFCI. Click on “I lost power to the bathroom, kitchen or outside” for information on GFCI outlets.

I lost power to the bathroom, kitchen or outside

A GFCI (Ground Fault Circuit Interrupter) outlet is a device that adds a greater level of safety by reducing the risk of electric shock in locations such as bathrooms, kitchens, laundry rooms and outdoors. A GFCI outlet may be wired in a branch circuit, which means other outlets and electrical devices may share the same circuit and breaker (or fuse). When a properly wired GFCI trips, the other devices down the line from it will also lose power. Note that devices on the circuit that come before the GFCI are not protected and are not affected when the GFCI is tripped.

If you have an outlet that doesn’t work, and the breaker is not tripped, look for a GFCI outlet which may have tripped. The non-working outlet may be down line from a GFCI outlet. Note that the affected outlets may not be located near the GFCI outlet, they may be several rooms away or even on a different floor. Pressing the “Reset” will restore the circuit. If the outlet doesn’t reset, then whichever appliance that is causing it to trip, may still be plugged in. If after unplugging everything, checking the circuit breaker or fuse, and resetting the GFCI does not work, please submit a maintenance request right away.

Checking for a blown fuse

Before electricity can be restored, the fuse must be replaced with a new fuse. However, even before you replace the fuse, you must take steps to ensure that it is safe to do so:

Electricity should now be restored to the circuit. If the fuse blows again before you have turned anything on or plugged anything in, submit a maintenance request  right away.

If the fuse blows after plugging in or turning on a device, that device may have a short or may be placing too much of a load on the circuit.

If no fuses were blown and you still do not have power at an outlet, make certain that the switch, if any, that controls the outlet is turned on. If you can find no problem, the outlet, switch, wiring or some other component may be at fault. Also, the outlet may be on a GFCI branch circuit. Click on “I lost power to the bathroom, kitchen or outside”.

How To Use a Garbage Disposal

Note: It usually takes only a few seconds to grind food waste, although it depends on the quantity and type of food waste.  The sound of the disposal will change when there is no more food waste in the grind chamber.

We know that unintended problems do arise in the kitchen, so if your disposal stops working, check out “How to Reset a Garbage Disposal”.

What Not To Put in a Garbage Disposal

First things first, never place any type of fats, oils, grease in a garbage disposal, or down a sink drain for that matter.  Those materials collect inside the plumbing pipes and are usually the cause of many plumbing issues.

Disposals can quickly and efficiently grind most everyday food wastes, including leftover meats, vegetables and fruits, as well as food preparation waste.  The key to keeping a disposal working properly is to follow the proper operation steps and avoid filling the disposal with too much food waste at one time.

There is often the question of using a disposal for eggshells and coffee grounds.  In fact, neither of these materials is harmful to a disposal, and will pass through it without a problem.  However, problems can arise with household plumbing – especially if it is older, or has not been cleared in some time.

Both coffee grounds and eggshells are sedimentary in nature, if too much is placed in at one time, or if the plumbing is restricted, it can create a clog or a ‘slow drain’ situation.  Too help avoid any problems, feed these materials into the disposer gradually, and utilize a strong flow of cold water to help flush it through the pipes.

How to Reset Garbage Disposal

If your garbage disposal won’t run you may need to reset the garbage disposal using the RED overload protector button on the bottom. If the disposal is clogged, if it is run for a very long period of time, if it overheats, or if there is something wrong with the disposal, it will shut down automatically and need to be reset.

If the overload protector has tripped, you will see that the red button has popped out about a quarter of an inch (5mm).

My air conditioning is not working

Before calling in your problem or making a work order request, please check the below possible options:

If after checking the above and you still do not have air conditioning, please submit an on-line maintenance request.

Dishwasher does not work – no sound, water or lights

Dishwasher does not fill with water or it drains while filling

Water does not drain from the dishwasher

Dishwasher is leaking water or soap leaks around the door

Door does not close or latch properly

Dishwasher cycle does not complete

Detergent cup does not open

Dishes are not cleaned adequately

Beep/chirp approximately 2-3 times every 5 minutes most of the time means the battery needs changed. If that doesn’t fix it, it may have lost power to the unit or have a loose connection. If you unplug the detector from the ceiling/wall, it will probably continue making noise because there is a back-up battery in most of them. If you take the battery out it still has enough power stored internally to beep 4-5 more times.

I put the wrong soap in the dishwasher - now what?

So you used dish soap instead of dishwasher soap? If you did, you know the result; lots and lots of soap suds that just won’t stop. So what do you do? 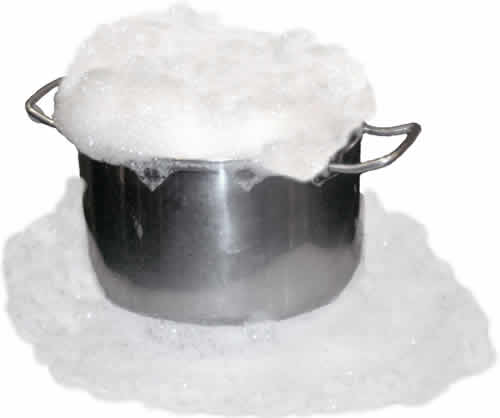 This is easy to fix, if you know what to do; and we do. First scoop out as much water as you can and dump it in the sink. Next add a cup or two of white vinegar and run the dishwasher for a short time. Now scoop out more water.

The vinegar cuts the foaming action of the soap. You may have to repeat the process to eliminate the suds because some soapy water remains inside the pump and hoses.

Also, if you poured it into the soap dispenser, wash that out by hand to get all the dish soap out.

A clogged water filter can restrict the flow of water to the dispenser and prevent the dispenser from working properly. The water filter should be replaced about every six months to maintain proper water flow and ensure water quality.

A clogged water filter can restrict the flow of water to the dispenser and prevent the ice maker from working properly. The water filter should be replaced about every six months to maintain proper water flow and ensure water quality.

If your garage door isn’t closing all the way, you may have a problem with the aligning of the sensors at the bottom corners of the garage door. This may occur if anyone has accidentally bumped into them.

Still having problems? Get in touch with us.

Log into the tenant portal to make a repair request. We will get in touch with you shortly to resolve the problem.